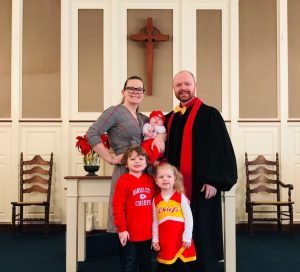 Kris grew up in Sedalia, MO attending Broadway Presbyterian Church with his grandparents, whose families both helped to found Presbyterian churches in central Missouri. He first experienced God’s call to ordained ministry the summer before his freshman year of high school during a Montreat Youth Conference in Montreat, NC. Two years later, Kris was ordained as a Deacon at Broadway Presbyterian Church during his junior year of high school.

As many young adults do, Kris struggled the first couple of years in college. He wrestled between his passion for politics and his call to ordained ministry. During his undergraduate years, Kris served as a volunteer youth leader, worked on the summer staff at Montreat Conference Center, directed the Program Staff at Mound Ridge Presbyterian Camp for two summers, served as the Director of Youth Ministries at Broadway Presbyterian Church in Sedalia, MO, and served as pulpit supply for several churches in mid-Missouri enjoying his love of preaching the gospel.

Kris graduated with a Bachelors Degree in Speech Communication and minor in Political Science from the University of Central Missouri where he was honored as the 2006 Speech Communication Scholar of the Year. He went on to do his graduate work in an ecumenical setting at Eden Theological Seminary in St. Louis. Eden is a seminary of the United Church of Christ, a sister denomination with which the PC(USA) is in full communion. Kris received his Master of Divinity in May of 2010 where he was awarded for outstanding scholarship and academic achievement. While doing full-time graduate work, Kris also served full-time on the staff at First United Presbyterian Church of Belleville, IL as the Director of Youth Ministries. First United is a church in an area known as the St. Louis Metro East.  Ordained in October of 2010, Kris’ first ordained call was as Associate Pastor at Christ Presbyterian Church in Toledo, OH.

Kris has continued his educational journey post seminary, and holds Graduate Certificates in Executive Leadership, Engaged Compassion, and Public Management from McCormick Seminary, Claremont School of Theology, and the Truman School of Public Affairs at the University of Missouri, respectively.  Rev. Schondelmeyer recently completed a Doctorate in Contextual Leadership with a concentration in Religion and Public Policy from Palmer Theological Seminary of Eastern University.

Kris is a survivor of clergy sexual abuse from when he was a youth, and now a strong advocate for creating safe and sacred space within the PC(USA). In fact, his story story as a survivor created positive changes at the 222nd General Assembly of the PC(USA) held in Portland, OR, and the 223rd General Assembly held in St. Louis. Kris now proudly serves on the PC(USA) Survivors of Sexual Misconduct General Assembly Task Force, and the team has been working hard to identify polity gaps and to make recommendations for polity changes which will help to create a church where children, youth, and vulnerable adults are safe.

Kris is lucky to be the husband of Abby, and the “daddy” of Alexander, Karrick and Isaac.  They are proud to be a part of the life of the Presbyterian Church of Deep Run, and are passionate about opportunities to reach out to other young families.